Census data shows that one-in-seven software developers in Hudson County, New York, were born in the United States, down from a six-in-seven share in 1980.

This wholescale replacement of American software experts by foreigners — mostly by Indian visa workers — is repeated in many counties across the United States, according to 2017 federal census data analyzed by R. Davis, a software developer in Silicon Valley.

The trend is spreading into other sectors, including accounting, health care, and design because U.S. investors and Indian firms are cooperating to transfer many professional-grade jobs to India and the payroll savings to Wall Street.

In 2017, American-born programmers were just one-in-four software employees in Santa Clara, California, down from four-in-five in 1980.

Just one-in-three software developers in Richmond County, NY, were born in the United States. One-third of the workers in Forsyth County, GA; McLean County, IL; and in San Bernardino County, CA, in 2017 were American-born.

American-born software experts are only half the workforce in Snohomish County, WA; in Cleveland County, OK; in Douglas County, NE; in Montgomery County, MD; in Suffolk County, MA; and in Benton County, AR, the home of Walmart.

“It should be concerning that some very key areas, like Silicon Valley and New York City, have the largest swings in the demographics,” Davis told Breitbart News. He continued:

I think that these areas have reached the point that there is a real risk that tech workers from certain countries (mostly India) are being favored in the hiring process.

One item that I haven’t really heard covered is the fact that the majority of recruiters now seem to be India-born … I have had 4 on-site interviews since being laid off and interviews with 18 people during those interviews. A full 13 of them appeared to have been born in India and only one seemed to be likely U.S. born.

That may have been partially bad luck and much of the problem that I had getting hired may have been from ageism, being in my early 60s. Still, it seems to point out a risk of one nationality getting too high a representation in the hiring process.

There is a growing volume of anecdotal reports and courtroom evidence that Indian managers at U.S. companies and subcontractors prefer to hire Indians, usually by covertly discriminating against better-qualified American applicants.

Much of the evidence comes from Indian immigrants to the United States who are appalled by the predatory Indian business practices that have pushed American graduates out of their jobs and careers. These Indian “ex-immigrants” tell Breitbart News that they identify with their fellow Americans.

The hiring bias towards fellow Indians is made possible by the federal government, which has created and defended various visa worker programs.

These visa programs allow U.S. companies to keep an army of roughly 1.5 million foreign graduates — including roughly 800,000 Indian graduates — for a wide variety of jobs across the United States. Most visa workers will work for low wages in the hopes that their employers will provide them with the hugely valuable prize of green cards.

The work visas include the H-1B, B1, TN, and L-1 visas, plus the H4EAD work permit, and the Optional Practical Training (OPT) and Curricular Practical Training (CPT) work permits that are issued via U.S. universities and colleges. These roughly 1.5 million visa workers are slotted into good jobs in design, fashion, health care, engineering, accounting, management, recruiting, and especially in software — partly because top executives and investors think they are cheaper than indebted American graduates.

The bias is spotlighted by online ads offering to hire and train Indian graduates in the United States for jobs at Indian-run software firms:

@USTechWorkers @USCIS @NeilMunroDC @USDOL
Visit “H1b community” on FB and message few of these Indian recruiters (operating from offshore).Corporations are unwilling to take US grads as Interns for an on the job training and instead find OPTs @$20-40/hr no obligations. https://t.co/AxRGez47vI

The result is that many U.S. companies — either directly or via their many subcontractors — hire Indians and other foreign workers instead of American graduates. For example, on September 9, Kotchen & Low filed a lawsuit in San Jose on behalf of an American who was allegedly belittled and sidelined by Indian managers at a U.S.-based Indian company, named Happiest Minds. The lawsuit says:

On information and belief, both Happiest Minds’ internal recruiters and its third-party recruiters give preference to locating and recruiting South Asian and Indian candidates, who are then given preference throughout the hiring process

Foreign workers — especially Indians — have rational, self-serving reasons to pull each other into U.S. jobs and to discriminate against Americans.

Americans and Indian visa workers tell Breitbart News that Indians expect jobs will be bought from Indian recruiters and hiring managers, usually via kickback to Indian recruiters and managers. This cash-for-jobs practice is rational because even low-wage sweat-shop jobs in third-tier subcontractor companies in the United States are better than office jobs in India — partly because any job in the United States is one step closer to the jackpot of getting a U.S. green card.

This routine cheating is spotlighted by Indian-born technology experts, including a person who tweets under the pseudonym “American_desi- blocked by IV.”

Really Bharat? being an Indian you KNOW how many people lie and fake their resumes. You also know about proxy interviews, job support, bribing the hiring manager and other 3 rd world practices that some H1B’s bring.. Join our cause so that the genuinely skilled are rewarded

A “desi” is an Indian term for an Indian. “Blocked by IV” refers to Immigration Voice, which is the leading business-backed lobbying group that is pushing to win more green cards for Indian visa workers.

The cheating is simplified by the myriad fake resumes that are offered by a resume-forging industry and by an Indian industry of test-takers and “proxies” who will pretend to be the job-seeker during online interviews.

#NoS386 Video is an example of a meritorious Indian giving proxy interview. https://t.co/TfuyphveDr

Indians hired for jobs in the United States can hide their shortcomings by hiring Indians in India to do their U.S. work via a backdoor software link to their desktop computer. This informal subcontracting os called “job support” or “program support.” Often, the new Indian workers are trained by skilled Americans who are being replaced.

The result is that many Americans are shoved aside by the Indian visa worker industry. Davis’s census data shows the trend in Silicon Valley’s Alameda County: 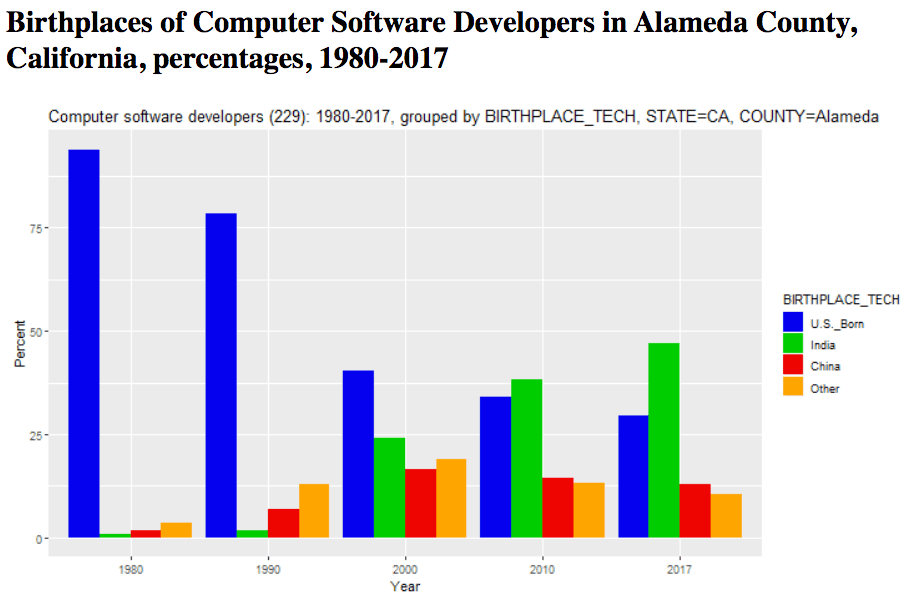 In a 2016 lawsuit against a giant Indian software firm, Infosys, American witnesses alleged:

Hiring Manager Instructions: an Infosys hiring manager admitted “There does exist an element of discrimination. We are advised to hire Indians … because they will work off the clock without murmur and they can always be transferred across the nation without hesitation unlike [a] local workforce.”

Applicant Data Manipulation: Infosys manipulates applicant tracking data in such a way that consideration of non-South Asians and non-Indians is minimized, and the hiring of South Asians is maximized. For example, recruiters have observed that non-South Asian applicants were repeatedly deleted from Infosys’ applicant tracking system, forcing one recruiter to keep a separate spreadsheet of applicants on his computer. Recruiters have also observed South Asian applicants, located by Infosys’ “sourcers” in India, manually entered into the applicant tracking system despite those individuals not having formally applied, thus streamlining the hiring process. Individuals sourced in this way were moved “to the front of the line” ahead of applicants in the U.S. A recruiter also observed that applications for United States positions were regularly not reviewed, and in 2016, approximately 11,000 to 12,000 were rejected en masse.

U.S. employers tolerate the growing evidence of corruption because the inflow of Indian workers helps to lower the marketplace wages for all software workers, including skilled Americans. Early-stage investors are especially eager to shortchange their employees because they need to display good profit-and-loss numbers to their targeted stock-sale customers on Wall Street.

U.S. companies also use the Indian workers to help shift U.S. jobs to lower-wage Indians in India via the U.S-India Outsourcing Economy. The outsourcing economy allows investors to import cheap Indian visa workers to take U.S. jobs — and also to help transfer other white-collar jobs back to Indian worksites. Indian officials claim their outsourcing industry has created four million jobs in India because of outsourcing contracts from U.S. and European companies.

The Indian outsourcing economy is similar to China’s free-trade manufacturing economy because it is creating huge wealth on Wall Street by moving U.S. office-park jobs to India, just as the free-trade deals moved factory jobs to China and the payroll savings to Wall Street.

Many Chinese are also hired as visa workers for jobs in the United States. However, they are usually slotted into high-end jobs at U.S. banks, major software firms, and research centers. The inflow of Chinese is so large, say Americans, that it has created networks of Chinese managers who also disfavor Americans.

GAO warns DHS to do more to prevent the smuggling of Indian and Chinese graduates into U.S. white-collar careers, such as software, healthcare, accounting, etc. Most smuggling takes place via the universities’ ‘OPT’ work-permit giveaway to foreign grads. https://t.co/NSUIVQDO4m

Investors and CEOs have used visa workers for three decades and have also provided many of the visa workers with green cards. So the Indians’ share of the skilled workforce is rising, and Indians are moving up the management ranks. For example, former Indian visa workers are now the top executives at Microsoft and Google, and they reportedly fill many senior management slots at many famous companies, including Cisco Systems.

The huge use of imported Indians also leaves roughly 300,000 Indian workers in the United States in a lengthy legal limbo between the status of visa worker and the hoped-for status of green card holder. In turn, many of those 300,000 workers have joined with business lobbies to push for GOP Sen. Mike Lee’s S.386 bill, which would expand the inflow of Indians into the U.S. college jobs.

The S.386 outsourcing bill is also backed by Georgia GOP Sen. David Perdue, Kentucky GOP Sen. Rand Paul, and by about 30 other GOP and Democratic Senators.

So far, the S.386 bill has been stopped by Democrat Sen. Dick Durbin. His decision is applauded by a loose array of pro-American activists, led by American female technology graduates and by Indian and Chinese graduates, visa workers, and legal immigrants.

Credit to Sen. Durbin; He delays Sen. Lee’s @S386 green-card giveaway to the US-India Outsourcing Economy. But he wants even larger #s of foreign grads! I assume he knows a larger inflow will cut US grads’ salaries & so pressure them to vote Democratic. https://t.co/Xv1zuocHNY

Activists expect Sen. Lee will try to include the outsourcing bill in the must-pass appropriations bills for 2020, and they worry that Durbin will submit to pressure from investors and the Indian visa workers.

The rising Indian share of the industry and the amazing decline of Americans is the most prominent trend in these charts, which show the national origins of software workers in U.S. countries. Decade by decade, the Americans’ blue columns shrink as the Indian’s green columns — and the Chinese red columns — rise: 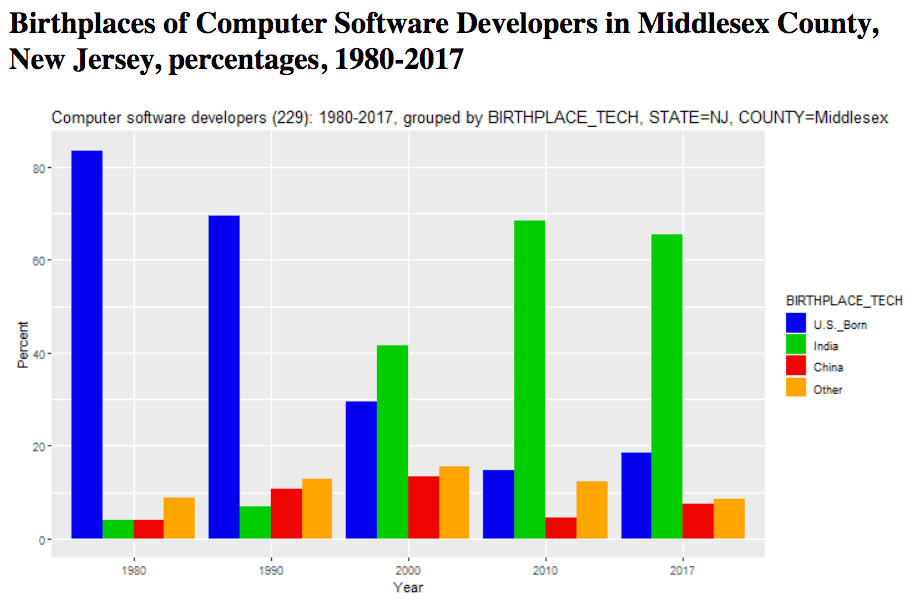 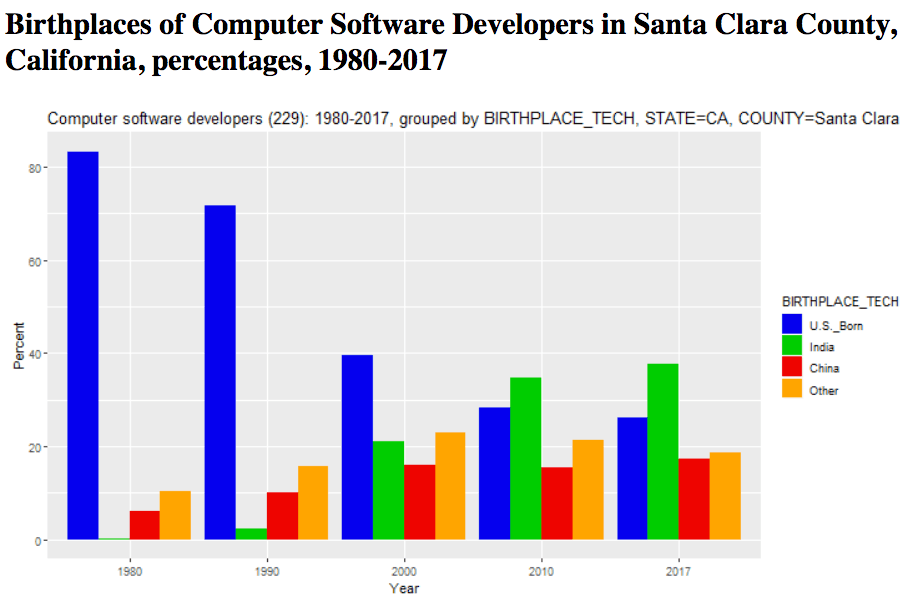 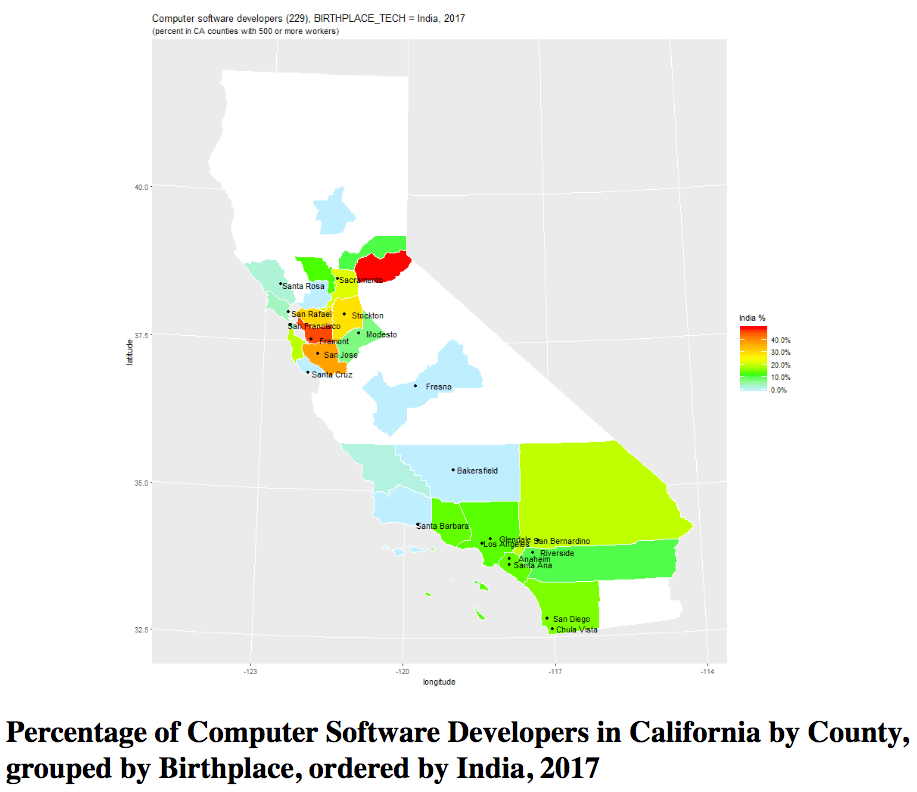 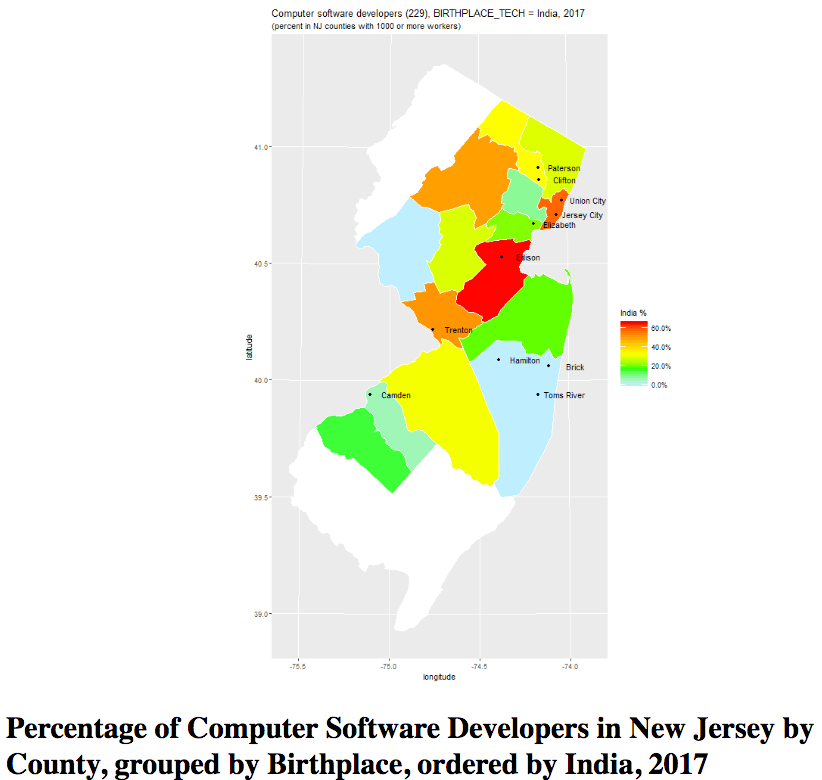